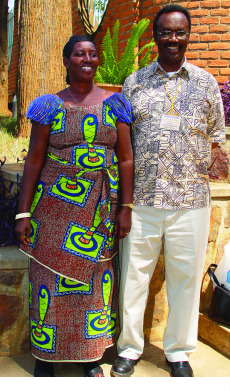 Simon Nziramakenga fled Rwanda in 1962 when the initial violence broke out. He lived in Uganda until the Rwandan refugees were expelled as war erupted in Uganda. For the second time in his life he fled as a refugee, this time to Kenya. In Kenya, he met a young Rwandan refugee named Kedress who had a similar story. She too had fled Rwanda in the early 60s with her grandmother. In the forest of Uganda, her grandmother died and she grew up in the Ugandan forest as a refugee orphan. She was soon forced to flee Uganda for Kenya. Simon and Kedress met and married in Kenya where they started a family. They served on staff with Campus Crusade for Christ and also had a vibrant ministry to the Rwandan refugee community in Kenya.

Although Simon and Kedress had firsthand experience of the violence in their home country, they were devastated when genocide broke out in April of 1994. When the violence ended, they learned that together they had lost about 100 members of their family in those one hundred days. Soon after the genocide, they returned to Rwanda to build a church with a vision that went far beyond weekly Sunday gatherings. The nondenominational church, the Good Shepherd Community Church in Kigali, and its leadership focus on a holistic approach to ministry, seeking to meet the physical, emotional and spiritual needs of the community and to bring healing to their broken country. At present, the church has planted twenty-four churches throughout Rwanda and Democratic Republic of Congo and has over 5000 members. The Good Shepherd Community Church has founded a theological Bible College in Kigali, developed a film on AIDS prevention for the country, built a primary school for over 200 orphans, and is currently partnering with One Hundred Days to bring much needed health care for the pediatric community especially in Nyabisindu one of the poorest areas of Kigali.

Simon and Kedress have 4 grown biological children and have adopted many others. The lastest is Fabrice, a now thriving 5-year old boy.